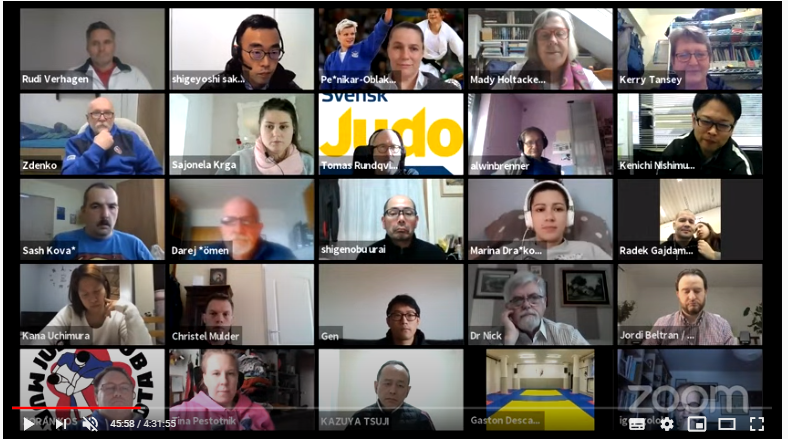 Plan of the report

Firstly, to understand the purpose of the organization Judo3.0, the mission and philosophy of this one will be described.

Then, the ongoing of the seminar, with the speaker’s interventions will be presented. Also, information about the participants and links to other report or invitations to next seminar will also be presented.

Finally, the speakers will present an abstract made about their presentation during this 1st online seminar.

Judo 3.0 is a non-profit organization, located in Oganawa (Japan). This organization has been established since January 2015 by Shigeyoshi Sakai, who is the representative director. He is a former lawyer and 3rd dan Judoka. He believes that education system, by being rebuilt, is the key for improvement of society.
The main mission of the organization is to exchange ideas with the goal to involve education through Judo, exercises, movements, and the principles of its philosophy, by promoting international exchanges, workshops, courses, seminars, camps, … about diverse sub-thematic with all in common the Judo philosophy, the method of teaching and its potential in education system and therefore society improvement.
The idea of Shigeyoshi Sakai is well represented in an interview published in the magazine gochamaze.jp. in 2017.
He shows how Judo can help people to increase self-affirmation. Mr. Sakai come to the following conclusion “Judo has the power to save so many people.” By the specificity of the activity to create human connections between the people who practice it. Here we arrive to the high potential of Inclusion throughout the activity, for people with diverse abilities, has Shigeyoshi Sakai is showing with the example of children with developmental disabilities, by pragmatically demonstrating, that if each of the 9000 judo clubs in Japan could include 10 children with developmental disabilities, then 90.000 of those children could be included in the activity, and therefore, has a final goal of education, in the society.
Following this statement, the organization took the orientation of creating seminars about “Inclusive Judo” to exchange different ideas, stories, education tips and methods from diverse actors of this area around the world. The first seminar has been held on the 14th of March, through the platform Zoom, the next one will be happening on the 16th of May.

Report of the seminar

On March 14 this year, the Non-profit organization Judo 3.0 called for an international exchange on the subject “Judo and Inclusion”. Judo 3.0 is a charitable organization based in Oganawa (Japan) and founded by Shigeyoshi Sakai in January 2015.

The organization aims to promote the exchange of ideas, provide education via Judo including exercises, moves, and the principles of its philosophy by supporting exchange, workshops, courses, seminars, camps… On various topics on an international level.
Special emphasis is put on the philosophy of judo, teaching methods and their potential in the education system and their positive impact on society.

In seminars, as one took place on 14, March 2021 via the platforms Zoom, focus was put on the subject “inclusive Judo” to enable protagonists from around the world to share their ideas, stories, and advice on methods and education. The link of this first seminar, and the description made by the organization is the following one: “Inclusive” Judo seminar 1st – judo3.0 Online School.

Participants were all invited through a Facebook event (“Inclusive” Judo Seminar 国際インクルーシブ柔道セミナー | Facebook). Following the meeting, the organization gave a report in Japanese language on the wedsite page of the organization (インクルーシブな世界を柔道で！第1回インクルーシブ柔道国際セミナー報告 | judo3.0スクール). Also the sensei from spain, Jordi Beltran, briefly reported on Facebook the ongoing of the 1st seminar, presentd on a post here:

Very informative was the initial introduction of the different international associations that handle the affairs of Judo for athletes with intellectual disabilities. An important topic, especially with regard to upcoming competitions, is the harmonization of rules and the generation of standardized regulations that guarantee fair competitions. This matter was also highlighted by Kerry Tansey from the United Kingdom who is the sports director of “Virtus – World Intellectual Impairment Sport “. Virtus is responsible for the organization of large international tournaments around the globe, as well as outlining the regulations and requirements for ID- athletes (ID = intellectual disability) to participate in different sports. In Judo, Kerry Tansey introduced a system based on five different levels that aims to achieve a fair classification of athletes with different impairments. Details can be found at this website.

Furthermore, Virtus is a member of the International Paralympic committee. The goal to enable athletes with intellectual impairments the participation at the Paralympics is part of the Agenda.
IFON (International Federation of Independent ID-Judo Associations) was founded during the ID-Judo world cup in Cologne in 2017. Ms Mady Holtacker from the Netherlands was speaking about ambitions to popularize ID-Judo on a worldwide scale and further advance a fair classification system for competing athletes. Further information can be accessed under this website.
My personal statement: As another large organization engaged in ID-Judo exists in Special Olympics International it can be challenging to position oneself. Special Olympics is the largest worldwide organization for people with intellectual handicaps and has created outstanding events which also have their own regulation and classification systems. In my opinion, a parallel coexistence of organizations is not problematic because it provides very good opportunities for our athletes. But I have to agree to the opinion of Kerry Tansey who seeks to harmonize regulation systems.
Also very interesting were the reports on daily practical experiences.

Tsuji Kazuya reported from Japan as a representative of the Social Welfare Coperation „Warashibekai“ which has been offering Judo for people with physical, intellectual and developmental impairments since the 1970s. And since 2010 also for athletes with mental impairments.
Marina Draskovic from Croatia has already published a book titled „Judo for people with cerebral paresis “.

Sajonela Krga from Serbia presented inclusive Judo efforts from her home country. Ms Krga was representing her Judo club “Judo Sensei-IN Sombor” and the Judo federation of Serbia, which handles the affairs of Judo athletes with impairments. The first Judo club for handicapped athletes in Serbia was founded with the assistance of the experienced Darij Somen from the Judo Club Koper in Slovenia. They started to work about Inclusive Judo from September 2013. In 2017 the project started again and the support of Darij Somen was through the Inclusive Judo Commission of the Slovenian Judo Federation team. In the years following, they participated to tournament and organized the first “International seminar for judo coaches” in 2018, the second one was organized in 2019.

From Japan, the sensei Uchimura Kana, who is the representative of after-school daycare, called “Shoko”. She has provided Judo with children with the developmental disorder since the year 2019. She believes in the potential of Judo as having a high potential of rehabilitation and positive behavior changes for those children. She decided to start working in inclusive Judo after a travel in France in 2017, she considers this country as a model and having rich knowledge in the vision of “handicap” and inclusion

Digital seminars enable the creation of a global network dedicated to Judo and inclusion. Maybe the global COVID-19 pandemic helped to speed up developments in this regard, but for sure the motivation and the determination to reach their goals has been an integral part for many Judo athletes from all around the world for a long time now. And that our sport with its far-eastern traditions and rules offers the opportunity to all people to harmonize together and reach their individual goals, I was able to experience in this seminar both, serious competition and also casual Randori.

The outstanding organization of this online seminar was moderated by Victorija P. Oblak from Slovenia and Shigeyoshi Sakai from Japan. Ms Asako Takekuma Katsumata, who provided translation into their native language to the numerous Japanese participants gave this event a special international flair.

However, a second online seminar will be held on the 16th of May. It was agreed at the end of the first one, that three speakers will present their work. The first one is the sensei Sakai from Japan who will present the learning of different techniques. The second one is Tycho van der Werff from Nederland, he is going to present us some of his teaching methods, through some his videos. And the third one is Gaston Descamps from French-Polynesia, he will present body-mind and meditation technics that he uses in inclusive judo sessions.
Here is the Facebook link, to join this second seminar online:

Abstract from the speakers of the 1st seminar

In Serbia, judo for persons with disabilities (PWD) was present only among the visually impaired population. There are no available sources of reference on the provision of judo for people with different types of disabilities.
Judo for PWD has been implemented in Sombor since early 2013. Thanks to support of sensei Darij Šomen from JC “Koper” in Slovenia, we started program of Inclusive judo. The goal of this programme was to enable people with different types of disabilities to participate in sport activity in this kind of judo. We had started like sport section in the special school in Sombor, without support of judo Association and Local Government. I was only coach, and I was volunteering.  I had just finished my bachelor degree and I didn’t have any experience about coaching PWD. Also in my Faculty, we didn’t learn about adaptive sport activities. I got from Darij main support and knowledge. It lasted one year and it was very successful. Judo for people with disabilities have different names, and they all mean the same. We use Slovenian model of Inclusive judo, because judo for PWD is more than sport and competition. Unfortunately, it goes without saying that the sports clubs have places only for typical people. Inclusion means that all people have equal possibilities, and it also means that all people have possibilities to be part of sports clubs without discriminations.
As well, model of sport view on disabilities must to transform. If we look just on the abilities, we will get a new dimension and a great possibility to include every human in sport. In this case INCLUSION is a social term which means equal possibilities without discrimination, segregation and integration.
During the 2017, 2018, 2019, 2020 we held seminars, participated in competitions, built relationships and got support from different organizations. We made connection between Sport Association, Local Government, Special school, Daily center for PWD and club. Thanks to our model, one more judo club in Serbia started with the inclusive judo. As well Judo Federation of Serbia formed Commission for Development and Support Of Judo For People With Disabilities.
In 2019. we took part in 2nd ID judo European championship and our judoka Srdjan Vucelja took 1st place. Srdjan is a good example of inclusion in a typical group training session. In this way, he had developed maximum of his abilities. He is the first black belt judoka with different abilities.
Judo for people with different ability is more than sport and competition. We know that Jigoro Kano said that. It is not important to be better than someone else, but to be better than yesterday” and also the ideal of inclusion is to be the best version of yourself. I’m convinced that judo is the best sport for people with different abilities. Judo philosophy has great principles that are applicable to all forms of inclusion.

The history of warashibe kai judo school from judo3.0

The history of warashibe kai judo school from judo3.0